Metabase uses Cypress for “end-to-end testing”, that is, tests that are executed against the application as a whole, including the frontend, backend, and application database. These tests are essentially scripts written in JavaScript that run in the web browser: visit different URLs, click various UI elements, type text, and assert that things happen as expected (for example, an element appearing on screen, or a network request occuring).

During development you will want to run yarn build-hot to continuously build the frontend, and yarn test-cypress-open to open the Cypress application where you can execute the tests you are working on.

To run all Cypress tests programmatically in the terminal:

You can run a specific set of scenarios by using the --folder flag, which will pick up the chosen scenarios under frontend/test/metabase/scenarios/.

You can quickly test a single file only by using the --spec flag.

Cypress test files are structured like Mocha tests, where describe blocks are used to group related tests, and it blocks are the tests themselves.

We strongly prefer using selectors like cy.findByText() and cy.findByLabelText() from @testing-library/cypress since they encourage writing tests that don’t depend on implementation details like CSS class names.

Try to avoid repeatedly testing pieces of the application incidentally. For example, if you want to test something about the query builder, jump straight there using a helper like openOrdersTable() rather than starting from the home page, clicking “New”, then “Question”, etc.

contains vs find vs get

Cypress has a set of similar commands for selecting elements. Here are some tips for using them:

Sometimes Metabase views are a bit large for Cypress’s default 1000x660 viewport. This can require you to scroll for tests to work. To avoid that, you can increase the viewport size for a specific test by calling cy.viewport(width, height).

When you edit a Cypress test file, the tests will refresh and run again. However, when you edit a code file, Cypress won’t detect that change. If you’re running yarn build-hot, the code will rebuild and update within Cypress. You’ll have to manually click rerun after the new code has loaded.

Inspecting while the “contains helper” is open

One great feature of Cypress is that you can use the Chrome inspector after each step of a test. They also helpfully provide a helper that can test out contains and get calls. This helper creates new UI that prevents inspecting from targeting the correct elements. If you want to inspect the DOM in Chrome, you should close this helper.

Putting the wrong HTML template in the Uberjar

yarn build and yarn build-hot each overwrite an HTML template to reference the correct Javascript files. If you run yarn build before building an Uberjar for Cypress tests, you won’t see changes to your Javascript reflected even if you then start yarn build-hot.

You might run into problems when running Cypress on M1 machine. This is caused by the @bahmutov/cypress-esbuild-preprocessor that is using esbuild as a dependency. The error might look like this. The solution is to install NodeJS using one of the Node version managers like nvm or n.

Running tests that depend on Docker images

A subset of our tests depend on the external services that are available through the Docker images. At the time of this writing, those are three supported external QA databases, Webmail and LDAP server. It’s tedious to have five Docker containers running locally. An escape hatch is provided for people that do not care about these tests, but still need to run specs containing them locally. Run this command:

Please note the minus sign before the @external tag. For more details, consult the official documentation.

At the beginning of each test suite we wipe the backend’s db and settings cache. This ensures that the test suite starts in a predictable state.

Typically, we use the default snapshot by adding before(restore) inside the first describe block to restore before running the whole test suite. If you want to use a snapshot besides the default one, specify the name as an argument to restore like this: before(() => restore("blank")). You can also call restore() inside beforeEach() to reset before every test, or inside specific tests.

Snapshots are created with a separate set of Cypress tests. These tests start with a blank database and execute specific actions to put the database in predictable state. For example: signup as bob@metabase.com, add a question, turn on setting ABC.

These snapshot-generating tests have the extension .cy.snap.js. When these tests run they create db dumps in frontend/tests/snapshots/*.sql. They are run before the tests begin and don’t get committed to git.

Cypress records videos of each test run, which can be helpful in debugging. Additionally, failed tests have higher quality images saved.

These files can be found under the “Artifacts” tab in Circle: 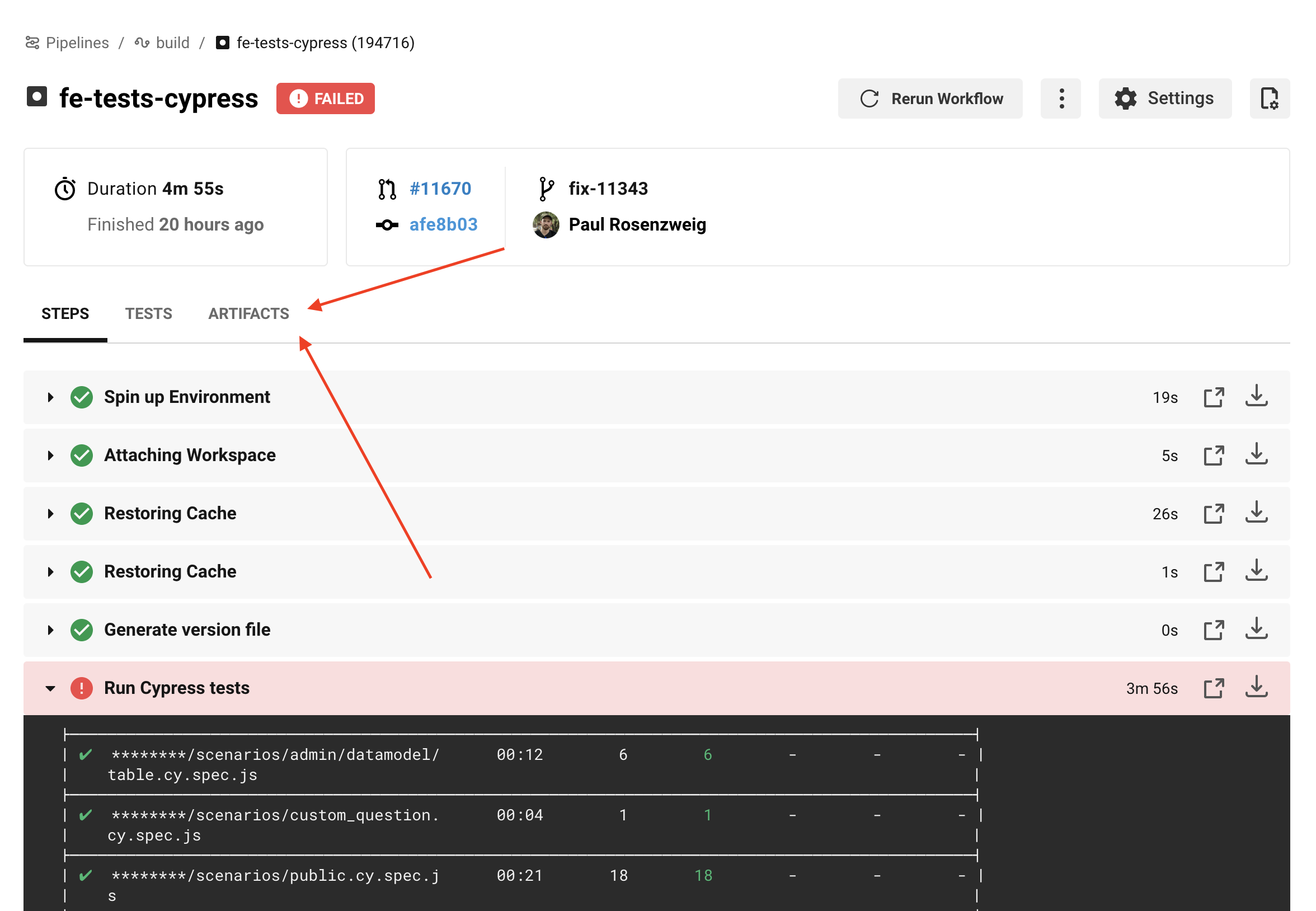 Prior to running Cypress, make sure you have a valid enterprise token. We have a special describe block called describeEE that will conditionally skip or run tests based on the existence of two environment variables:

If you navigate to the /admin/settings/license page, the license input field should be disabled and already populated. It should say: “Using MB_PREMIUM_EMBEDDING_TOKEN”.

Read docs for other versions of Metabase.

See something that needs fixing? Propose a change.